Well, that only took a year!


I have been on the prowl for the final three cards of the Cubs' 2002 team issued set for over a year with absolutely no luck.  I haven't been losing auctions, there just haven't been any.  The cards were nowhere to be found.


But now, in the last three weeks, I've got all three cards!


The first came to me via Phillie fan Jim, who was at Wrigley Field when the Lee Smith card was given away.  Less than a week after Jim sent me the Smith card, the last two I needed popped up on Ebay.  In fact, the seller had ten of the eleven 2002 cards available, including the Smith.  Suddenly the market's flooded with these!


I set my snipper immediately and then had to wait for one long week.  It a very unsettling feeling when you know a long-need card is up for auction.  You're hoping that no one else is as interested as you are.  I was not going to let these get away, so I set my bid pretty high.


As it turned out, there wasn't much interest at all.  Only one other person bid on each card and I was able to outbid them...the cards were mine!!! 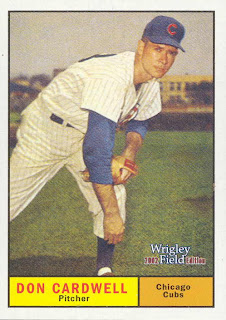 Don Cardwell's card is a 1961 reproduction.  He might seem like an odd choice for inclusion, but he does have a claim to fame: He pitched a no hitter in his very first appearance with the Cubs, the only pitcher to throw a no hitter in his debut with a team.  He tossed his gem against the Cardinals at Wrigley Field on May 15, 1960.  The card was given away on May 7, 2002 and over 35,000 were in attendance.  Apparently all were big Cardwell fans and they kept the cards for their personal collection.  That would be my reasoning for why these seem so scarce. 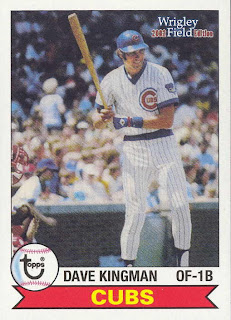 
I'm happy to have finally knocked off this set and your probably happy you won't have to keep reading about it!
Posted by Wrigley Wax at 9:00 AM