Beckett and Topps Cost Me a Few Extra Bucks

My go-to site for team checklists has been Beckett.  They will have a set's checklist on their website within a day of the set's release.  Not only do they have the checklist, but they have another list that has been broken down by teams.  I use the team list to make my own Cubs shopping lists.

Beckett makes their checklists based on what Topps has released.  Unfortunately for me, Topps screwed up the checklist for both wave 4 and wave 5 of 2021 206.  Each list shows a Cub player whose card did not show him as a Cub.

Usually if there is a team mistake on a checklist it becomes known almost immediately.  Checklists come from Topps just days before a product's release. Collectors who have bought and listed the cards see the mistake and spread the word.

That doesn't work for 206.  The list comes many weeks before we get to see the cards since the cards are printed based on how many were sold.  The Topps wave 4 checklist shows Alfonso Soriano as a Cub.  Craig Kimbrel is a Cub according to wave 5's list.  The lists at Beckett show the same thing.

So I bought the Soriano and Kimbrel card. 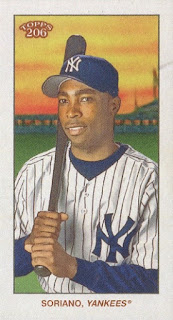 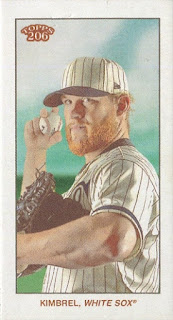 Now I'm out a few bucks.  Any Yankee or Sox collectors out there want these?  I have no use for them.