Meadow Gold issued three sets of cards in 1986.  Two years ago I picked up the Cubs in two of the three sets. The third set was the tricky one.  It consisted of cards that were printed onto milk cartons, the heavy wax-coated paper cartons.  The cards from this set are not easy to find.  Who cuts things off of milk cartons?  Not many people apparently.

The lone Cub in the 15-player set was Ryne Sandberg.  Sandberg stuff is typically harder because there are more collectors going after his stuff compared to other Cubs players.

An auction for the Sandberg card was listed a few weeks ago.  It was the first I'd seen in nearly two years.  My bid was too low and I lost.  Another was listed by the same seller, but I somehow overlooked it.  The same seller listed a third one.  After not seeing one in 22 months, one guy had three.  I wasn't going to miss out the third time around. 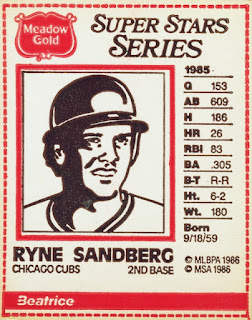