I've finally got all of the Ginter mini cards.  It took longer than I had hoped because I tried to save a little money.

I got all the cards from Sportlots and I used the Sportlots box for shipping.  With the box, you pay a reduced shipping charge and the cards are sent to Sportlots instead of your home.  This is a way of saving when you get cards from multiple sellers.

The cards are all sent to Sportlots.  Once they've all arrived you pay Sportlots to have the cards sent to your home.  It saved me about $10 in shipping.

The problem was that one seller was late sending my cards to Sportlots.  After two weeks I opened an issue to find out what was going on.  His response was that he was holding my cards, waiting for more orders so he could send in a bigger shipment to Sportlots, saving him on postage.  He didn't seem to show much regard for me, the customer.

Once I opened the issue he sent the cards.  I wasn't happy with the delay.  But once they arrived at Sportlots I had the entire box promptly sent to my house. 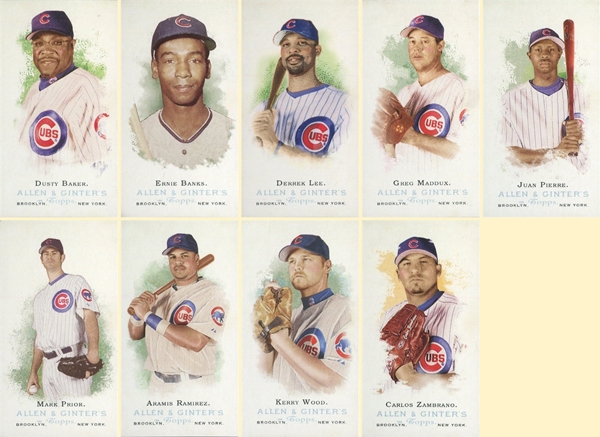 Nine Cubs were on the 2006 Ginter checklist, the initial release.  This is a great looking start!