Growing up it seemed like there were just two colas that mattered, and families were one or the other.  Coke or Pepsi.

My favorite pop (I'm a Chicago guy, we call it pop!) has occasionally connected with my favorite sport. 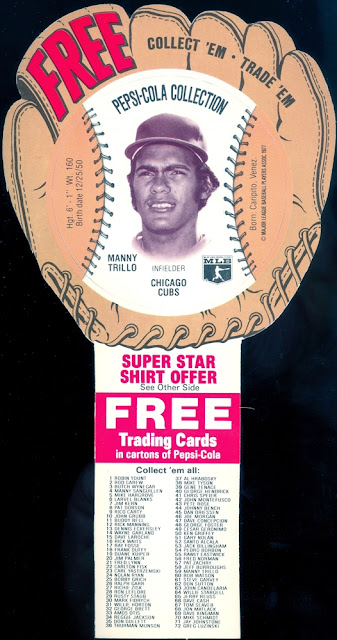 This came from an Ohio promotion in 1977.  These were inserted into 8-bottle cartons.  The checklist has 72 players and is heavy with Reds and Indians.  Manny Trillo was the only Cub on the list. 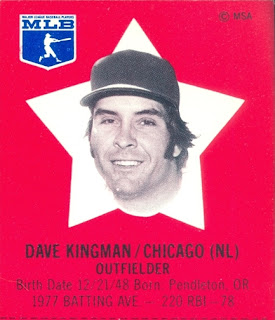 Ohio Pepsi had another set the next year.  The 1978 version was straight cards as they ditched the oversized mitt.  The checklist was reduced to 40 players and Dave Kingman was the lone Cub.  You see that both years had just a players license, so the logo were removed.

The next Pepsi set to include Cubs players came out in 1991.  This time it was Florida bottlers that issued the cards.  The checklist was limited to just 17 players, and two of them were Cubs.  Pepsi made wise choices with both, who ended up in the Hall of Fame. 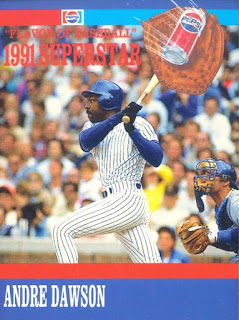 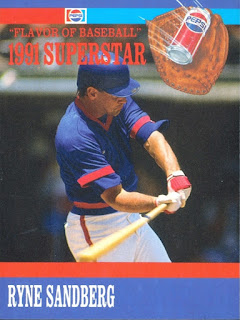 The lack of logos isn't too bad on the Dawson card.  The Sandberg, however, has some funkiness going on with his jersey.  I'm not sure why those large red bands were added to both the sleeves and the neck.