East coast bakery J.J. Nissen put out a 20-card set in 1989.  They lacked an MLB license so logos were removed.  One Cub made the set 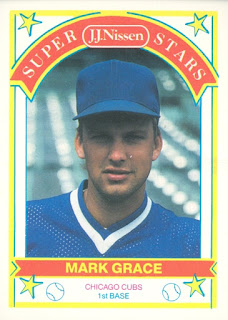 Grace was an up-and-coming player and he was selected over the Cubs two MVPs Ryne Sandberg and Andre Dawson.

Though a budding star, Grace was not well known to MSA, the company that produced the cards.  The initial release had a picture of Vance Law on the Grace card.  My card is the corrected version.

I've tried to find the error card but have had no luck.  The Standard Catalog put a price of $3 on it, so I figured that it can't be that rare.  But none of my usual haunts have the card.