I did a little more detective work with the two sets I showed in yesterday's post and go some help for you readers, too.

I know that they were not sold at Wrigley Field.  The picture packs the Cubs had at the ballpark were black and white and had a much larger selection of players. 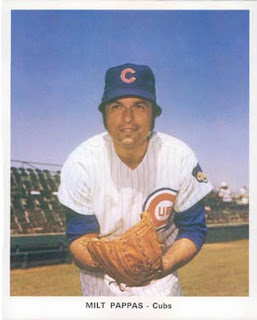 This is the Milt Pappas picture.

Here is where things get odd. 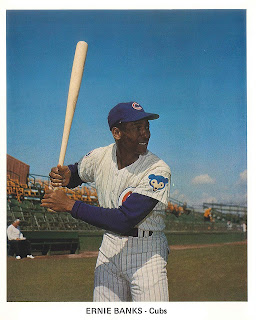 My set and the Trading Card Database set have the exact same design and font.  None of the players in my set on on the TCD list, and none on the TCD list are in my set.  Is it possible that there are actually twelve pictures in the set?

I'm inclined to believe that there were twelve pictures in a set issued in 1971.  The TCD also has color picture packs for several other teams listed and they have a similar design and twelve players on the checklist.


Still the biggest mystery to me is who made them.  There is nothing on the pictures to help with that.  The pack label has one clue, a company logo. 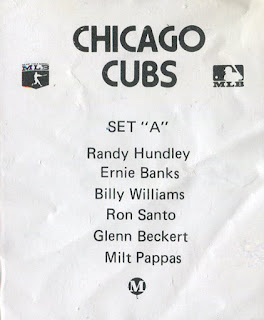 I have never seen the logo before.  A google search for M logos turned up nothing.  So as far as identifying the producer of the pictures, I'm still in the dark.

Anyone able to shed any light?
Posted by Wrigley Wax at 7:00 AM