It's been a couple years since I've picked up one of these. 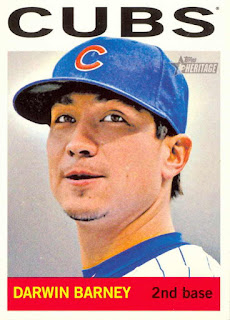 The 2013 Heritage card of Darwin Barney isn't a big deal.  Flipping the card over is.

The card is the black back version, the Venezuelan version.  They are a lot more rare than most people are aware.  I've picked up as many Barney card as possible on Ebay.  I typically pay just a buck or two for each.  Seems like a bargain for something so scarce.

My unofficial watch shows that just 16 have been listed since 2013.  I bought twelve of them.  I also got one from COMC, giving me a total of 13.  I'd love to find out the actual print run to see what percentage of them I've got.