I've got 19,735 Cubs cards from 300 different brands listed on a spreadsheet. A random number generator picked five cards, one each from the past several decades. 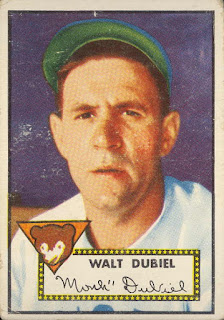 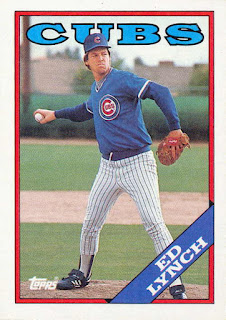 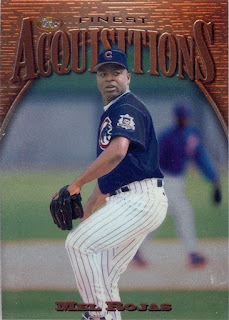 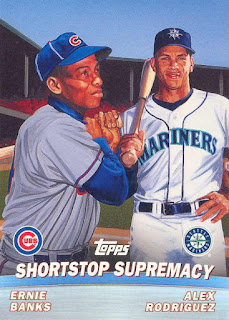 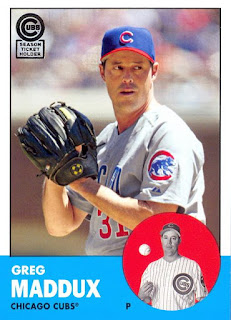 There are four Cubs cards in the 40-card Fleer Famous Feats set.  No team had more (though three teams had just as many).  I think it's safe to consider these feats as famous  because none have ever been repeated or topped. 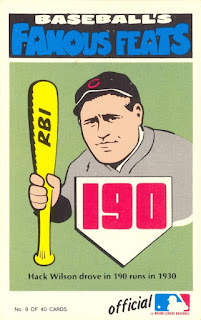 Technically, this one has been topped... by Hack Wilson.  In 1999, it was discovered that he was shorted an RBI in a game on July 28.  His single season RBI record now stands at 191. 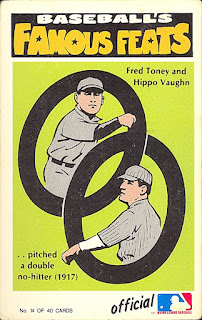 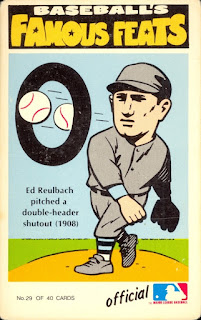 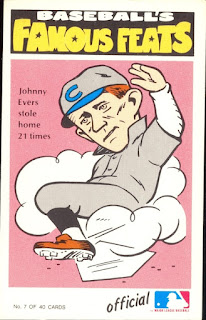 The second series of the Wide World Sports set for the Smithsonian came out in 1987.  Like the first series, it consists of 60 cards.  The only design difference is that series two cards do not have a logo in the bottom righthand corner.

Below are the three Cubs included in series two.  Can you name them?? 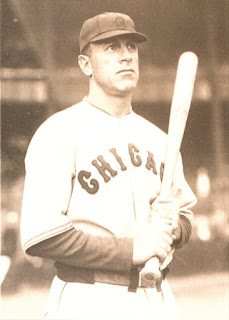 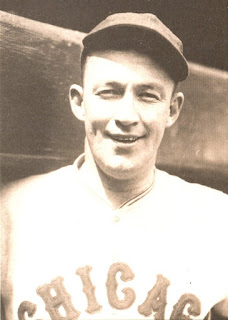 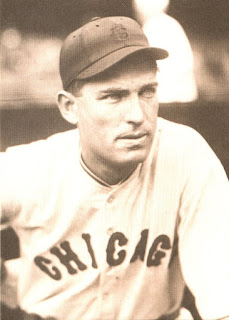 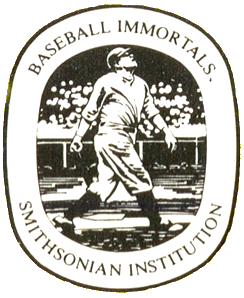 In the mid-1980s the Smithsonian Institution had an exhibit called "Baseball Immortals."  It featured the photographs of Charles Conlon.  And of course, you can't have an exhibit without having merchandise to sell.  The institute had Wide World Sports produce a set of cards that included some of the Conlon pictures that were in the exhibit.

The set was issued in five series over three years.  The cards were all the standard size of 2½" x 3½".  The front was a full-bleed picture with career stats and a write up of the player on the back.

Set one, made up of 60 cards, came out in 1986.  There is a Babe Ruth logo in the bottom left front of each card.  That logo was only on the series one cards.

Two Cubs were in the set. Both were also in the 1984 postcard set and in fact, the same pictures were used in both. 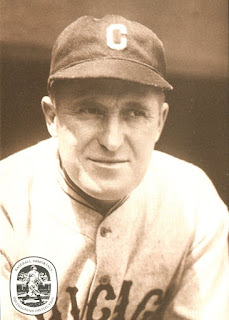 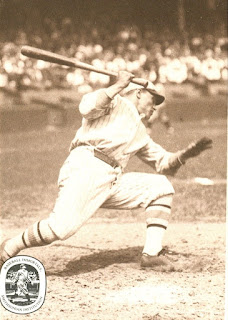 In case you forgot, that's Joe McCarthy and Hack Wilson.
Posted by Wrigley Wax at 7:00 AM No comments:

Marketcom put out another Sporting News Conlon set in 1984. The set included both over-sized cards and postcards.  There are 60 cards in the sets, though not 60 players. Several players (Ruth, Cobb, Matthewson, among others) have multiple cards.  The same players are pictures are used on the cards and postcards.

There are three Cubs players included, each with one card. 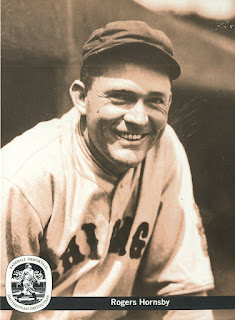 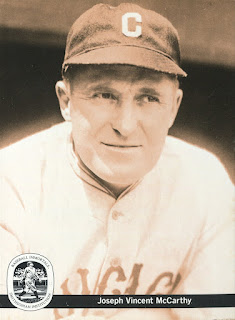 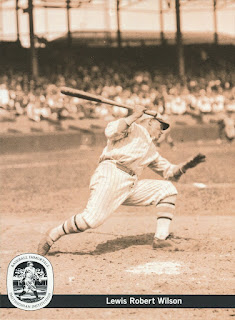 These are the large cards, which measure 4" x 6".  It's nice that they have the player's name on the front.  No guessing needed here.  The TCDB puts Wilson in the Cubs team set.  I'm pretty sure, though, that the picture shows him with the Giants.
The postcards were standard postcard sized and have a full bleed picture on the front, with no names. 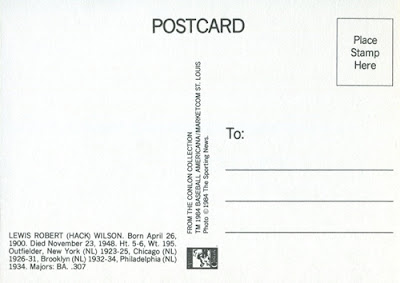 The backs were that standard postcard design. 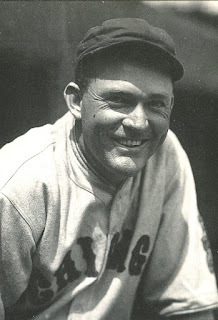 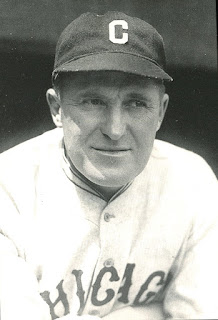 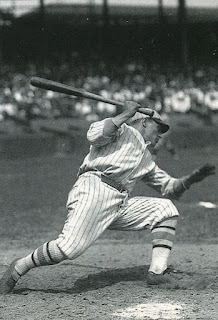 The All-Star game celebrated its 50th anniversary in 1983.  The Sporting News and Marketcom collaborated to produce a set that commemorated that first game.  The set consists of 60 cards featuring both major league players along with twelve All-Stars from the Negro Leagues.

According to the Standard catalog the set has cards for all the players that were on the 1933 All-Star rosters.  But that is not correct.  There were three Cubs on that first All-Star team, Gabby Hartnett, Lon Warneke, and Woody English. 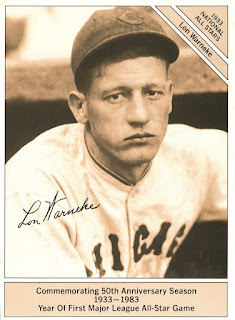 Only Warneke has a card in the set. 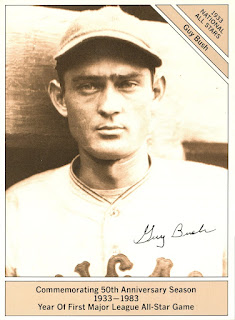 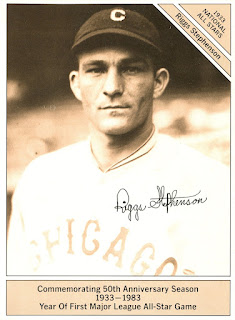 Included in the set but not All-Stars are Guy Bush and Riggs Stephenson.  You can see why the catalog would have assumed that the players in the set were on the rosters. The upper right corner of the card says "1933 National All Stars."
It seems very odd for a set to commemorate the All Star game by leaving out players that were in the game and included those who weren't on the team.
Posted by Wrigley Wax at 7:00 AM No comments: 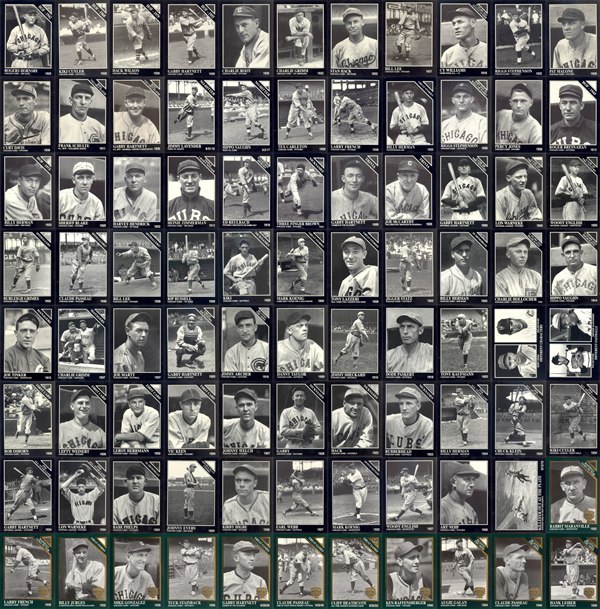 Years ago I collected all of the Cubs cards in the Megacards Conlon Collection set that was released from 1991 - 1995.  Charles Conlon was a New York-based photographer who worked from 1910 through the early 1940s.  The rights to his photos were owned by the Sporting News and Megacards worked with them to produce the set of 1430 cards.

Megacards wasn't the only company that the Sporting News licensed.  In the 1980s they produced some cards by themselves and later partnered with Marketcom and World Wide Sports.  It took me a while but I've finally got all of the Cubs cards from these various sets.  I'll be showing them over the next several days.

There are just three Cubs cards in this set. 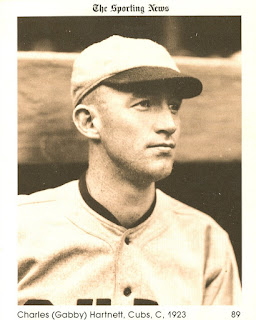 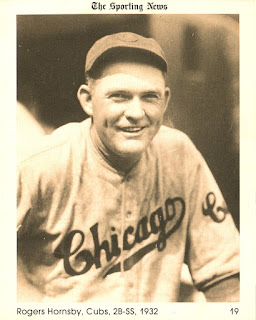 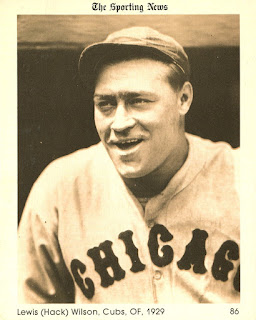