Both of the magazine cards that I've show recently used Topps designs on the front.  They differed with the backs, though.  Baseball Card Magazine used the Topps back design while Baseball Card Price Guide generally did not.

There was a reason for not using the Topps backs.  The Price Guide cards called themselves Pocket Price Guides.  The idea was to put price information on the back and them you could take them to card shows.

I've got the backs from their five years of cards below.  They are all of Ryne Sandberg and are in order going down from 1989 to 1993. 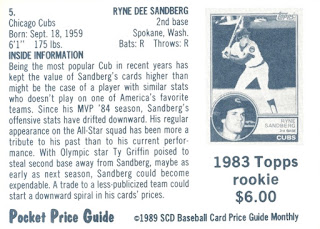 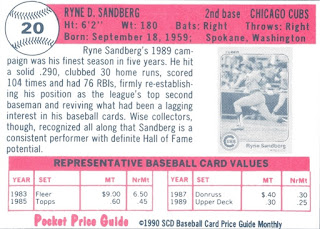 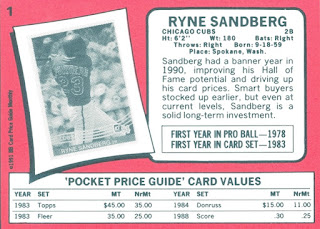 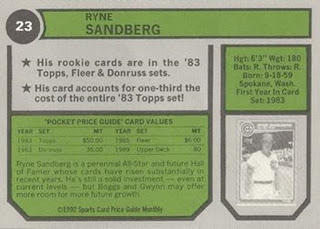 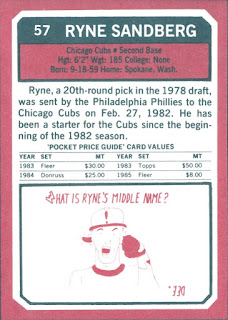 Those are mint card prices.

And today?
An inflation calculator says that $50 in 1993 is worth about $86 today
Recent PSA 9s of his card have sold for around $30.  You can buy raw versions of the card for five bucks or less.

The baseball card bubble of the early 1990s has popped.
Posted by Wrigley Wax at 7:00 AM 1 comment:

The 1993 version of the Baseball Card Price Guide set broke new ground for these magazine cards.  Instead of copying a Topps baseball design, they went with their the 1973 Topps football design.

The set grew to 104 cards, but it was made up of players from all four major sports. That may explain why they went with a football design.  Of the 104 cards, 54 were baseball players and two were Cubs. 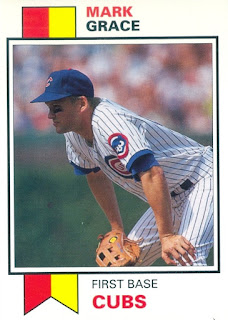 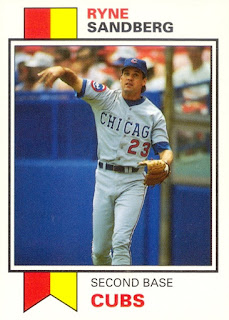 Its a pretty plain design that will work with any sport.  And how did they do? 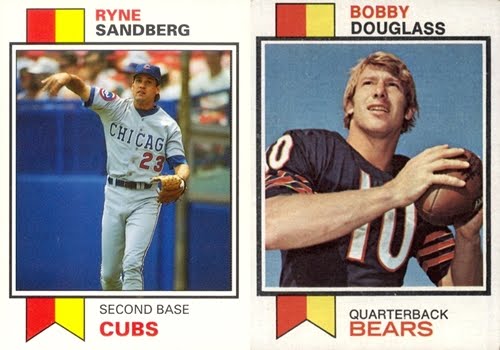 Not too bad.  About the only glaring difference is the space between the position and the team.


The 1993 set was the final for SCD, as it was for Baseball Card Magazine.  I wonder if Topps stepped in and told them to stop swiping their designs?
Posted by Wrigley Wax at 7:00 AM No comments:

The 1992 version of the Baseball Card Price Guide set is full of ups and downs.

Up... the one Cub was Ryne Sandbeg 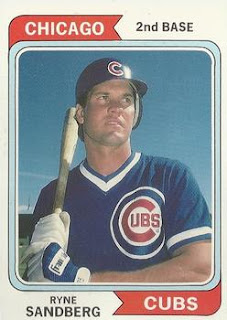 Down... the card is nowhere to be found.  The picture is borrowed from the internet.  I can't find the card anywhere, not on Ebay, Sportlots, Beckett Marketplace, or Checkoutmycards. 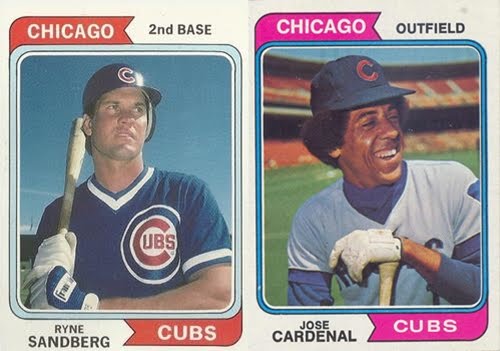 Down... they used red instead of pink, otherwise it's not a bad replica.
Posted by Wrigley Wax at 7:00 AM 1 comment:

I first ran this post on Memorial Day six years ago.  It's worth re-running today.