Mrs. WW and I did a three day bike trip along the Fox River in Illinois over Memorial Day weekend.  We rode between Oswego and Crystal Lake, about 45 miles each way.  This is the third time we've done this route and it has always been a nice ride.

We always plan to spend the second night in Geneva.  We stay at a hotel that is about two miles off the trail.  It is also about 1½ miles from Northwestern Medicine Field, the home of the Kane County Cougars.   Taking in a Cougars game is always a nice way to spend an evening.

The Cougars have been around since 1991 and we went to several games when we lived in the NW Chicago suburbs.  The team was popular right from the start, and led the Midwest League in attendance several times.

Drawing big crowds didn't mean much to MLB however.  When the minor leagues were restructured this past winter, the Cougars were one of the teams that lost the MLB affiliation.  They became a team without a league.

The franchise is now a part of the American Association, which is a partner league with MLB. That means that the Cougars have to get all of their players and coaches by themselves instead of them being provided by a major league team. 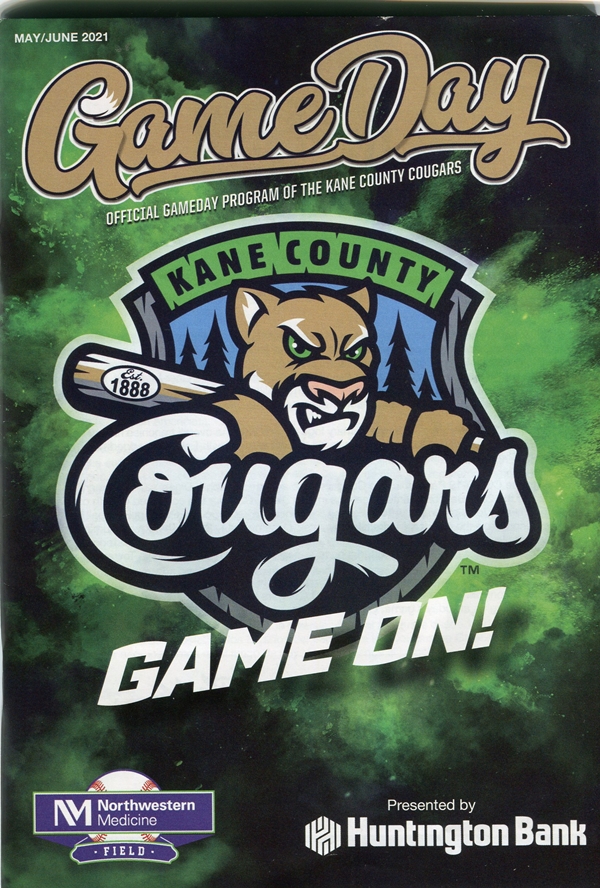 That became apparent when reading the free GameDay program.  The 52-page book doesn't contain a single word about the players on the team. There is no roster, no player biographies, no player pictures.

The action on the field didn't seem as sharp, either.  The Class A Cougars had players in their late teens and early 20's.  The age of today's Cougars was more in the mid to upper 20s.  They are guys that were cut from MLB organizations and are looking for that one last chance to make it.

It would be nice if one of the players we saw did make it, but we'll never know.  The program didn't tell us who we saw!