Despite being in the Hall of Fame, Billy Williams hasn't been showing up on too many cards the past few years.  So its big news (at least to me) that a new card of his was made.  It wasn't Topps, but Leaf that put out this card. 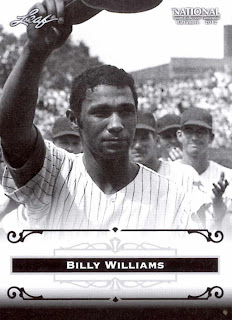 The card was made to be given away at the recent National Convention in Baltimore.  Leaf obviously doesn't have an MLB license, so the team logos had to disappear. But you hardly notice due to great photo selection and some tight cropping.

The picture was taken on Billy Williams Day, June 29, 1969.  On this day, the Cubs played a doubleheader against the Cardinals.  Billy tied the NL record for consecutive games played in game one and set the record in game two.   He went 5 for 9 for the day with a single, two doubles, and two triples. 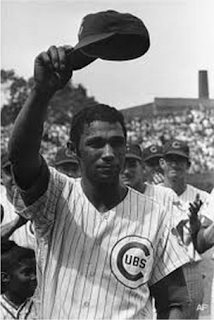 Here is a look at the original picture.  You can see that Leaf didn't have to get rid of too much.  Nicely done!