Thank Goodness For the Backup

We learn in baseball early on that we need to back up our teammates.  The center fielder backs up the left fielder.  The catcher runs down the line to back up the first baseman.  A throw coming into third?  The pitcher backs up the play.  Runs and games have been saved by backing up. 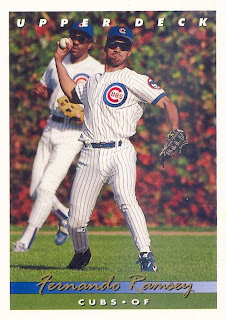 Andre Dawson was a very fundamentally sound player.  There he is in the background, backing up Fernando Ramsey.

But baseball isn't the only place where you need a good back up.   It's invaluable in the computer world, too. 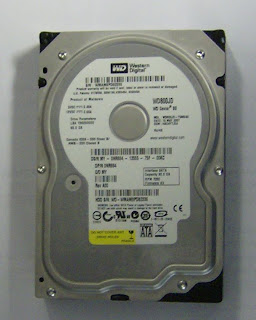 This is was the hard drive to my computer.  My dead hard drive.  For a couple months I had been getting the occasional, dreaded blue screen of death.  So I knew that something wasn't right.  With that in mind, I'd been backing up everything from the WW computer onto the family computer.

I've got scans of over 10,000 Cubs cards that I really didn't want to scan in again.  I've got a spreadsheet listing the same cards....didn't want to have to do that over again either.  I've spend hours creating custom cards, year cards, binder labels, checklists, and a bunch of other files.  Do overs are not an option.

A couple days before we left for vacation, the hard drive just quit.  The system wouldn't boot and I couldn't re-install anything either.  It was just a goner.  I ordered a new drive when we returned home and it came just a few days later.  Since then I've been installing the operating system and all the software.  I counted 24 different programs to load.  The system also needed updates, over 150 of them!

Getting the system in order was the hard part.  Since I had all my files backed up, all I had to do was transfer the backup copies from the family computer and I was back in business.  Everything is in place and everything is working properly, thank goodness!

I also got lucky.  About a month ago, knowing that there might be something going on with my computer, I looked into software that would automatically back up my files.  I found a free program called PureSync and installed it.  With it running, any time I add, change, or delete a file on my computer, PureSync makes the corresponding change to my backup folder on the family computer.  When the HD did die, I knew that I had a current and complete back up.  I am not a paid spokesman for the product, just a happy user.

Your computer will eventually quit on you, often at a really inconvenient time.  Save yourself a major headache and back up your files regularly.
Posted by Wrigley Wax at 9:00 AM