A while back I put together a list of the different cards that the Cubs gave away to subscribers of their monthly magazine, Vine Line.  I was missing just a couple.  Now I'm missing just one. 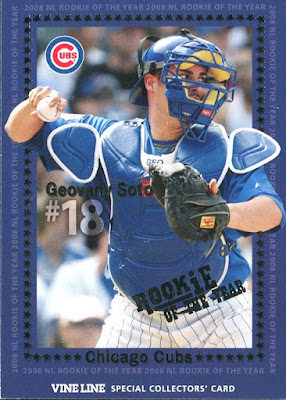 You got this card if you bought a one-year subscription to Vine Line in 2009.  Soto was named the NL Rookie of the Year in November, 2008, and the Cubs got the card out so after that.

The card is numbered to 15,000.  I wonder how many were actually give to new subscribers?  It doesn't show up very often.  Mine came from COMC.  I bought it from COMC through Ebay and it arrived in less than two weeks.  You pay a bit more through Ebay, but then you avoid the super-long shipping times.

The only Vine Line cards I'm missing is a postcard pack of Wrigley Field from 2002.