Looks Like I'll Be Buying Another Hall of Fame Postcard 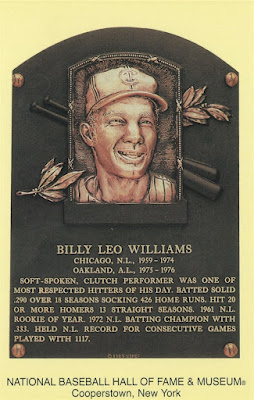 I have 53 of these yellow postcards from the Baseball Hall of Fame, one for each player in the hall that spend some time with the Cubs.  I'll be adding another to the collection next summer when Fred McGriff is enshrined.

McGriff was with the Cubs for part of the 2001 season and all of 2002.  His Cubs tenure got off to a shaky start because he initially refused to waive the no-trade clause in his contract.  The Cubs sweetened their offer and ten days later he became a Cub.

He played in a total of 195 games during his Cubs tenure.  He hit 42 homers and drove in 144 runs, so he was productive despite being 37 and 38 years old.  When the season ended he became a free agent and the Cubs showed little if any interest in resigning him.

I have 36 different McGriff cards in my collection.  He is also a relic rule follower, so I have one of him.  There were no certified autographs however.  The 36 cards make a nice rectangular 4 x 9 mosaic.