Playoffs, Update, and assorted other distractions have kept me away from my stroll through Starting Lineup.  I'll pick it back up today as we are up to the 1995 set. 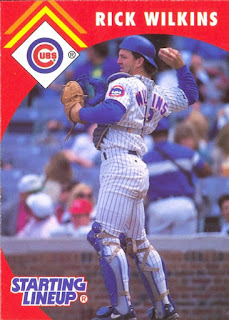 These are the only two Cubs among the 58 regular card set and the nine player extended set.  Wilkins was a curious choice.  He had a career year in 1993 but tanked in 1994.  His average dropped almost 80 points and homer went  from 30 to 7. Maybe Kenner was betting on a rebound year in 1995.  It wasn't and in late June he was traded to the Astros and took his .191 average with him.