Topps released Heritage '51 at the end of October.  For $80 you would get a complete set of 104 cards plus 21 parallels and an autograph card.

When Topps began the Heritage brand in 2001, they started with the 1952 set.  I guess they finally decided to go back and do a 1951 set.  Their 2015 version has 104 cards like the original.  But they went with full sized cards instead of the smaller, more squared cards that were issued in 1951. The modern version also comes on a heavier card stock than the original.

Six Cubs were included on the checklist, which is a couple over the average.  Winning team = more cards.  All the expected names were included... Bryant, Castro, Lester, Rizzo, Russell, and Soler.  I'm thinking that Arrieta and Schwarber would have showed up if the set had a later press deadline.

The original '51 set was advertised as a game to play and there were baseball outcomes in the corner of the card.  The modern version Cubs did pretty well 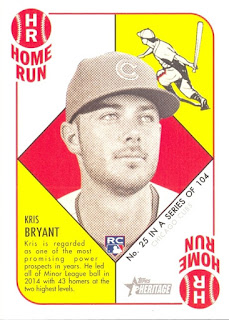 A home run for Kris Bryant! 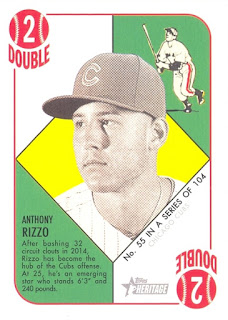 Rizzo lands on second with a double! 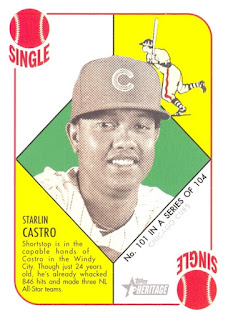 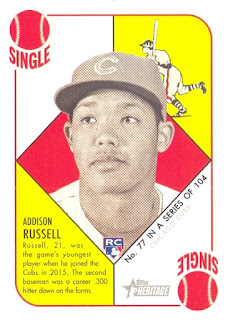 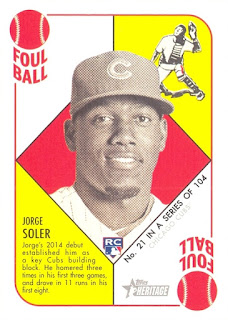 Soler was the only negative hitter, and he's just a foul ball, not an out. 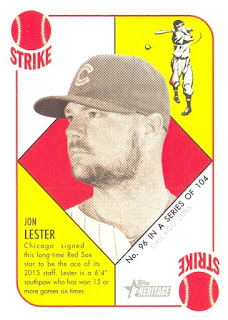 And Jon Lester throws a strike.

They all did better than they did in the NLCS against the Mets.
Posted by Wrigley Wax at 7:00 AM