One More for the Wall of Wax

I was finally able to get a 2016 pack for my Wall of Wax.  The only place in town that sells cards is Walmart, and they don't stock the single packs.  Its just blasters and blisters. WW Jr. wanted to spend some time at the mall in Kalamazoo, and I got drafted to pick them up.  As long as I was there I stopped at Target and picked up a few packs. 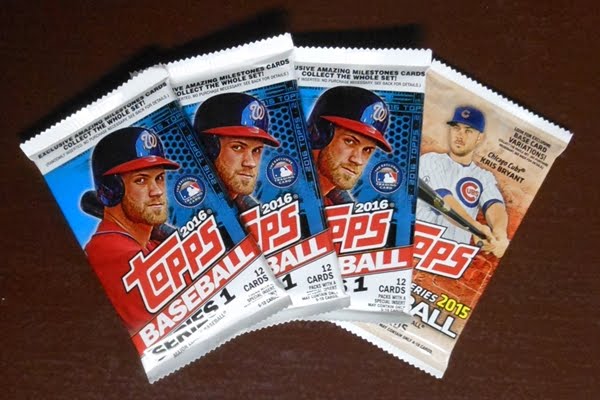 I got three from 2106 series one and one update pack from last year.

The update pack goes into my unopened stash.   As far as I can tell, its the first time a Cub player has been on the front of a flagship pack.

One of the 2016 packs is for the wall and the other two are for ripping.  I had to have something to tide me over while waiting for my brentandbecca order (which should be arrive later today if the USPS tracking is correct!)

The rip was a bust.  Twenty-four cards and not a single Cub....reminds me of my wax ripping days as a kid.  White Sox, sure....two.  Giants, Royals, Cardinals, Dodgers, A's, Blue Jays...two more of them.  But pulling a Cub??  Not a chance. 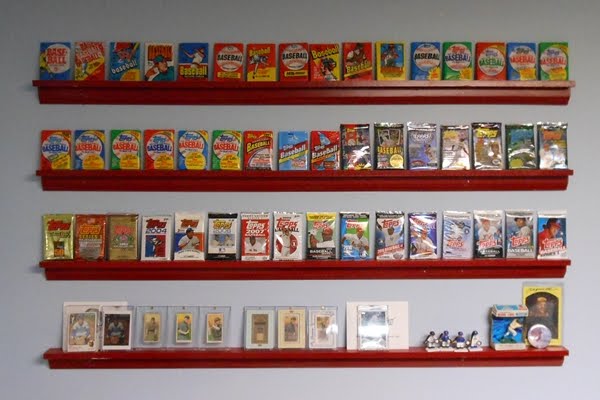 Here is the wall, with the 2016 pack added.  My pack collection coincides with my complete set collection. Both run from 1969 to the present.  That makes a total of 48 packs and sets.

This year is a milestone of sorts.  This year makes year number 23 for the foil packs.  That ties my number of wax packs (there are also two years of cellophane packs).  Wax is no longer the majority.

Rest assured though, that this will be still Wrigley Wax.  Wrigley Field Foil just doesn't roll off the tongue the same way.
Posted by Wrigley Wax at 7:00 AM