Two More That Meet the Rule

The 2016 Series One checklist gave me an autograph and a relic that meet my collection rule. 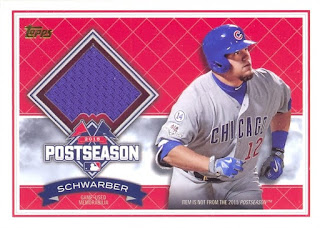 Schwarber was included in Topps Postseason relic insert set, so I picked up this card.  It is /100.  His homer in the NLDS that landed on the top of the right field video board was a post season highlight.

There is, of course, this little disclaimer.  You wouldn't expect a postseason piece in a set called Postseason, would you?  That's just crazy talk.

The relic tally is now up to 74 different Cubs with at least one certified relic card released during a year they played for the Cubs and the card shows the player as a Cub. 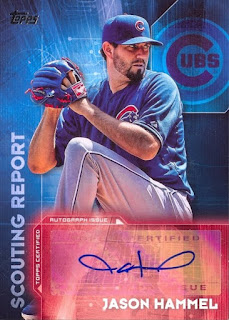 Here's the autograph, of Jason Hammel.  Too bad its a sticker auto.

The autograph total is now up to 116.

I would imagine that sometime this year Jason Heyward will be added to both lists.
Posted by Wrigley Wax at 7:00 AM