Backing Up the Truck: Jim Hickman

In return the Cubs got Chicago native Scipio Spinks.  Scipio was battling arm problems and he never pitched for the Cubs.  He spent the next two years in AAA and AA ball for three different organizations, but his arm was never the same. 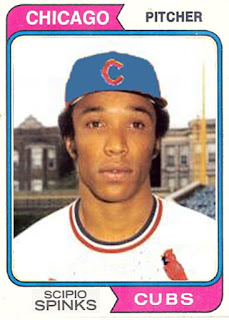 Hickman didn't have a card in the 1974 set despite playing in 93 games.  Spinks played in just 8 games in 1973 and Topps included him, with the Cardinals.  I made the above Cubs version,  Notice the ugly hat I made.  I also left remnants of the Cardinal uniform visible to give it an authentic, ugly 1974 Topps look.