The Cubs Bowman Prospects from 2011

I thought it would be interesting to take a look back at the Cubs prospects that were in the Bowman set five years ago.  My thinking is that five years later, we should know whether they were boom or bust.

The Cubs cupboard was pretty bare in 2011 as just two prospects were in the Bowman set.  What has happened with them since 2011? 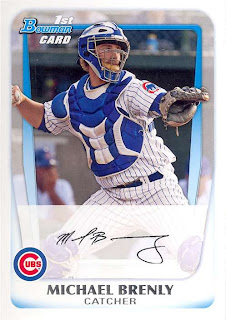 Michael Brenly had no business being drafted, let alone included in Bowman.  I'm sure the Cubs took him as a courtesy to his dad, Bob Brenly, who was doing Cubs TV at the time.  A 43rd round selection is not expected to ever see Wrigley Field unless he has a ticket.

Brenly bounced around the Cubs organization through 2012, advancing as high as AA before the Cubs let him go.  He spent 2013 in the Diamondbacks organization, which, coincidentally is the team that Bob Brenly managed to a World Series title.  The next two years he moved into the Red Sox system and right now he is out of organized baseball. 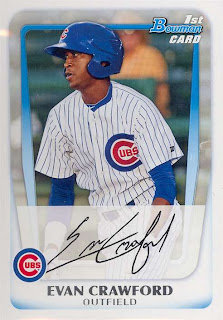 Evan Crawford was a 9th round pick of the Giants in the 2009 draft. The Cubs acquired him in August of 2010 as Mike Fontenot was sent to San Francisco.  He was with the Cubs high A team in 2011 and then missed all of 2012 with injuries.  The Cubs released him on March 31, 2013 and he spent the next three seasons in independent ball.  He is not with any time right now.

So...five years later the only two Cubs prospects Bowman deemed worthy enough for inclusion are out of baseball, never having sniffed the big leagues.

Like I said, the cupboard was pretty bare.
Posted by Wrigley Wax at 7:00 AM