One of the goodies I got from reader Chad was this card... 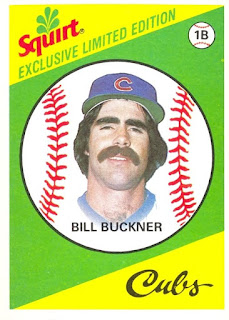 It shouldn't have been.  A couple years ago I put together a collection of all the different Topps / retail sets.  For years Topps has worked with different retailers and issued special sets.  I have cards from 11 different retailers (Ames, Circle K, Drakes, K Mart, Kaybee, Marketside, Quaker Oats, Revco, Rite Aid, Toys R Us, and Woolworth.

Somehow I completely missed the Squirt set.  The pop brand issued sets in both 1981 and 1982.   The cards came attached to a bottle in an eight-pack (are any of you old enough to remember eight packs of 16 ounce glass bottles?).  The hanger had two cards

There were 22 different panels that included 33 different players.  That configuration means that some of the players were double-printed while some got short-printed.

The Cubs netted two of the 33 slots.  In addition to Billy Buck, 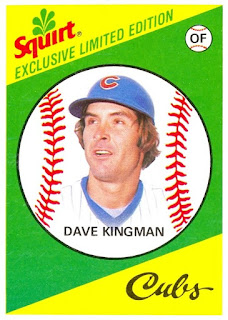 Dave Kingman was included.  That's a pretty decent picture of Kingman. with almost a smile on his face.

Squirt and Topps issued a set the following year too.  The set size was reduced to 22 players and none of them were Cubs.  This was one of the easiest brands for me to complete, with just two cards.