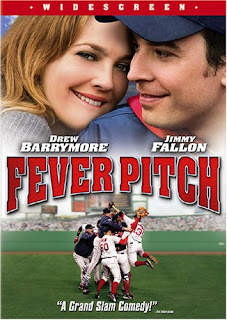 When 8-year-old Ben moves from New Jersey to Boston, he is friendless and lonely.  His mom has Uncle Carl take young Ben for the day and being a season-ticket holder, Carl takes Ben to Fenway Park.  At that point Ben begins his Red Sox obsession.

Fast forward 23 years and Ben is now a high school teacher and has also inherited his uncle's season tickets.  Ben takes a few students to a field trip to a company that uses lots of math, trying to inspire the kids.  There he meets Lindsey.  After being prodded by his students, he asks her out.  They begin dating.  Since it is the off-season, Ben's Bosox obsession is somewhat on hold and he and Lindsey hit it off.

The relationship get bumpy when the 2004 season begin as now Ben becomes more focused on the Sox and less on Lindsey.  Things eventually come to a head and she decides to end it, fearing she'll always have the second spot in his heart.

Ben becomes despondent and eventually realizes he needs to change his priorities.  He decides to sell his season tickets as a way of trying to win back Lindsey.

Will he get her back?

Watch the movie to find out!

The movie is a harmless way to spend 103 minutes.  It is interesting that the movie was filmed in 2004, the year the Red Sox finally broke the curse.  In fact, the ending was changed to include that fact.

And Cubs connections?  The obvious would be the long championship droughts of the two teams.  Of course, 86 years seems like nothing compared to 108!

There were a couple ex-Cubs that showed up...

Dennis Eckersley was in the opening scene when young Ben goes to his first game.

And when Ben was reeling after Lindsey broke up with him, he spends time watching one of my all-time favorite Cubs Bill Buckner break his heart.