Looking Ahead to Heritage 2019

Once the buzz from the current year of Heritage dies down, I like to take a look ahead to the next year. So let's move on to Heritage 2019, or Topps 1970.

I know that there are many collectors that do not like the 1970 design.  The gray border is boring, they say.  For me, though, the 1970 design is one of my all-time favorites.  It's not for esthetics, it is for sentimentality. 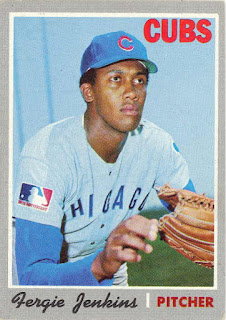 It should be a pretty easy look for Topps to duplicate.  The hardest part is going to be matching the font for the player's name.  I've seen different people make 1970 cards, but they've not been able to make an exact duplicate of the font.  A font called Kaufmann is what was used, but the version of Kaufmann on my computer is not exactly the same as the Topps version. 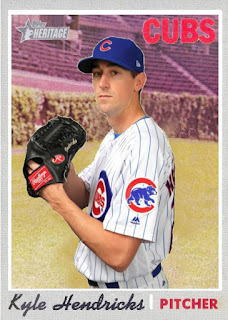 I was able to get an exact match for Kyle Hendricks, though....

I used the names from actual 1970 cards.  The K came from Don Kessinger, the yle is compliments of Sparky Lyle, and Elrod Hendricks donated his last name to the cause.

Now if only Topps would could be such a stickler for accuracy.
Posted by Wrigley Wax at 7:00 AM