Who's Butt Is It?

The card below was one of the five random on Sunday and I asked "Who's butt is it?" 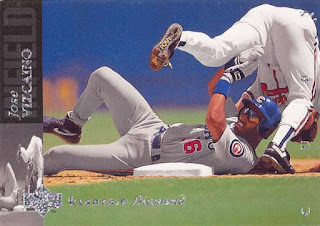 A couple comments left some guesses.   Tom thought it might be Jeff Blausser while Len was pretty confident it was Mark Lemke.  I felt the need to do some further digging.

In 1993 the Cubs played in Atlanta six times.  (I loved that old schedule from the days of two division, six teams in each -- play division opponents 9 home and 9 away, the other division six home and six away). But only one of the six Cubs games in Atlanta was a day game.  So I took a look at the game log for that game.

On Sunday, August 29, the Cubs and Braves squared off in the rubber game of a three game series.  A crowd of over 47,000 was on had to take in the action.

In the top of the third of a scoreless game, Vizcaino led off with a single.  Ryne Sandberg was up next, but the future Hall of Famer hit into a 6-4-3 double play, rubbing out Vizcaino at second.  Turning the double play was Braves second baseman Mark Lemke.

So Les was correct, that is Mark Lemke, with his short stirrups and Pony spikes (as pointed out by Len) and confirmation from the box score.

And if you need a little more confirmation, here is Lemke's.... 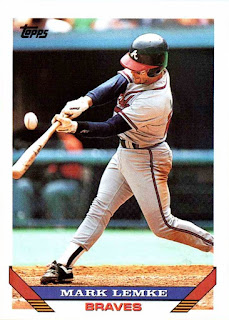 1993 Topps card, with the same stirrups and spikes.
Posted by Wrigley Wax at 7:00 AM