Topps Now isn't the first set to try and capture the season on cards.  Upper Deck tried it in 2008 and it was not pretty.

While Topps captures just the significant moments from each day, Upper Deck's Documentary created a card for each Cubs game of 2008.  It sounds like a good idea, but boy did Upper Deck screw up the implementation.

If a Topps Now card deals with a significant event or player of the day, it included a picture of that event / player.  It makes obvious sense. 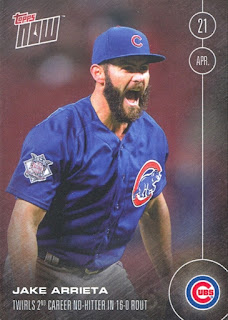 Upper Deck did not do the obvious.  The did they insane.  Though they created cards for each game, the pictures on the cards were not from that game.  In fact, they just kept reusing the same pictures over and over again. 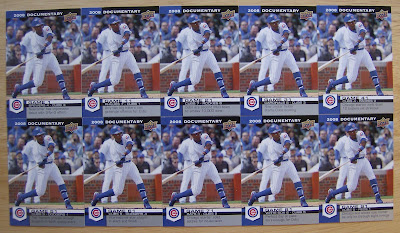 How nuts was that?  The first 100 cards in the set had just ten different pictures.  The next 33 cards rotated a mere three pictures.  The last 30 cards had three more pictures.  So in a set with 163 cards, Upper Deck used just 16 unique pictures!

Though there are many collectors that lament the Topps monopoly right now, I am glad that Upper Deck is no longer in the baseball card business.