The second week of 2021 1951 Topps included another Cub.  Two Cubs out of 26 cards is a pretty decent allocation.

The second week's print run was just a bit higher than week one, 7,725 vs. 7,679.  I wonder what the profit margin is on sets like this?  How much does Topps clear when they sell 7,725 packs of cards?  I guess it must be enough since they keep cranking out sets like this.

And who was the lucky Cubs player to be in the week two set? 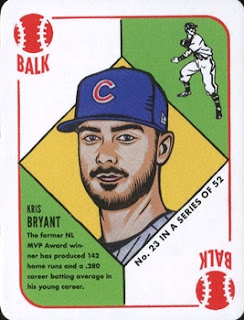 Kris Bryant!  And he gets the runner over, too, though not by anything he did.  Maybe Bryant's awesome plate presence scared the pitcher so much that he committed a balk.

The third week's pack also included a Cub - they were three for three.  I hope to have it in hand soon.