The sparkles are gimmick #1.  Photo variations are the second.  I was able to escape the scam in series one and two.  No so with Update.  The Cubs have two.

My base cards from Brentandbecca are still on their way, but the two variations have arrived. 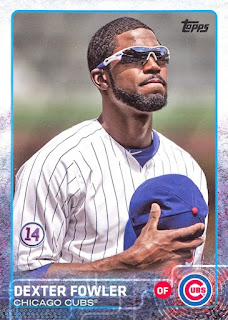 Dexter Fowler got both a sparkle and a photo variation. 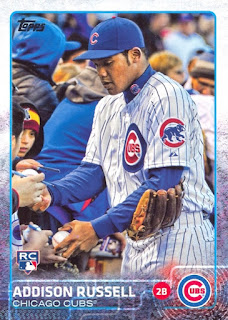 Addison Russell has the other variation.  Russell seems like a good guy and the variation has him signing autographs.  A quick search of Getty Images gave me the date of the picture, April 27.  That expains the his long sleeves and the bundled- up fans.
Posted by Wrigley Wax at 7:00 AM