I'm always finding something new and/or unknown, at least to me.

I thought that I had finished up with all the different Cubs team-issued sets years ago.  Their first set was in 1982 and the last complete team set was in 1999.

Then I found an auction for a set labeled by the seller as a 29 card Cubs Fox Sport Net set from 2000. The Standard Catalog doesn't list any Cubs set from 2000.  There is nothing on Beckett either.  A general Google search came up empty.

I had no idea what this was.

So I really wanted to get it!

I was able to snipe the set away for two other bidders that were going back and forth with each other for several days.

The set arrived yesterday and it gave me my first chance to look over the cards.  Here's a look at the front and the back. 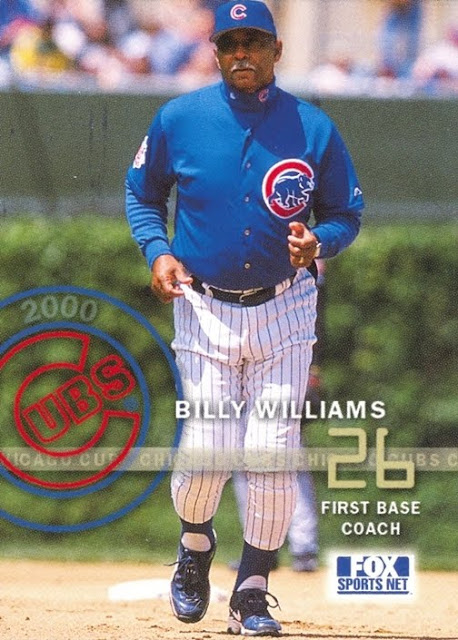 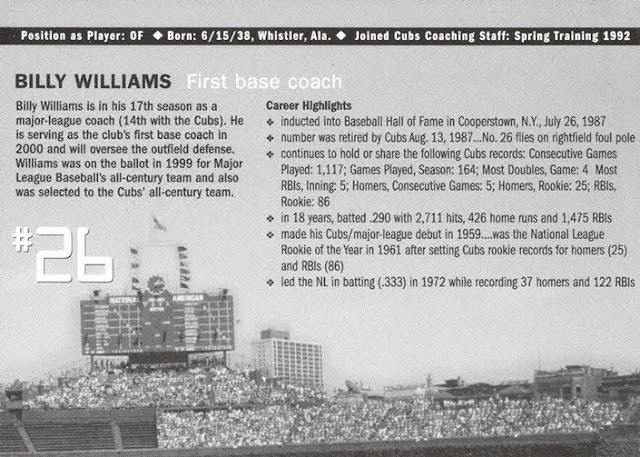 What a bonus that the set included Billy Williams.  Not many main stream sets included the coaches, which got me thinking that this was a set issued by the Cubs.  But as far as I knew, and had seen, there was no 2000 Cubs issued set.  I needed to keep digging.

I grabbed both my 2000 media guide and schedule.  I wanted to look over the listing of promotions.  Well, lo and behold, on each there was a Team Card Set giveaway shown for August 15.  Could this be that set?

Circumstantial evidence says yes.  Fox Sports Net was doing about half of the Cubs games in 2000, just their second year of doing Cubs games.  It makes sense that they would be a sponsor of the cards.  The set includes cards for the manager and all the coaches, as all the Cubs issued sets have.  The writing in Billy's bio on the card is almost a word for word copy of his bio in the media guide, which means that both were produced by the Cubs.

I have no idea how I missed seeing the 2000 set over the past few years.  But, it does seem fairly scarce.  No others show up in a Ebay search of completed or sold listings.  There were 10,000 of these given away, so they shouldn't be that hard to find.  But they apparently are, so I'm glad to have the set.

Anyone have any more info on these??
Posted by Wrigley Wax at 7:00 AM