Backing Up the Truck: Leo Durocher

It's ironic that the man who talked about backing up the truck was one of the first to go.

Leo Durocher came to the Cubs in 1966 and was a lightening rod for controversy from the moment he came to Chicago.  As the team improved and got very popular, Durocher was seen as the savior.

But when the team went through some bumpy times, Leo looked more like a jerk.

A few examples...
During the midst of the pennant drive in 1969, he took a couple days off the visit his wife's son at a camp in Wisconsin.  He also lied about it.

He and Ron Santo nearly came to blows in the clubhouse when Durocher accused Santo of demanding a Ron Santo Day.

By 1971 the negative rumbles coming from the players regarding Leo were getting louder and louder.  And the response of Cubs management? 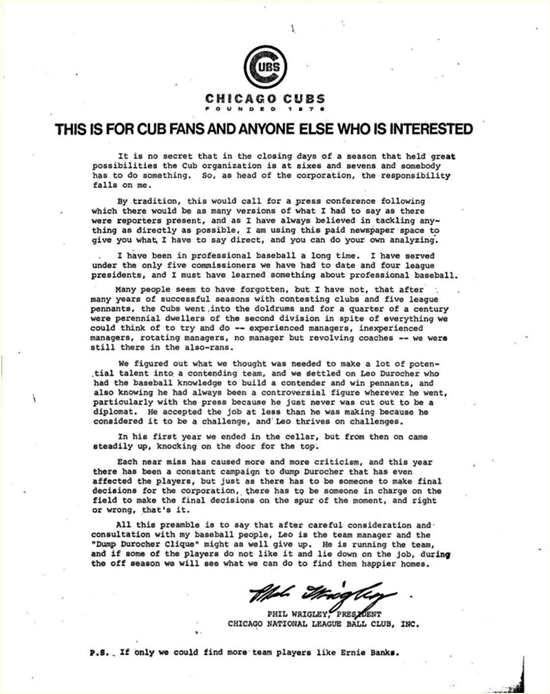 This ad that ran in early September, 1971 in all four Chicago papers.  Wrigley was backing Leo and slamming the players.  The team went 10-14 after the ad came out.  It didn't exactly inspire them.  It probably had the opposite effect. 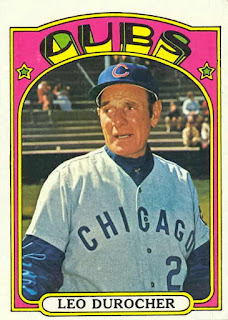 As the 1972 season began, the team was aging and it wouldn't have too many pennant runs left.  At the All-Star break they were 46-44.  Management finally had had enough of Leo and he was fired.

His dismissal was front page news.

Leo's record as Cubs manager was 535-526, a .504 percentage.  He managed four teams over his career and his Cubs percentage was the lowest of the four.  It turned out to be a pretty disappointing run.
Posted by Wrigley Wax at 7:00 AM