A couple weeks ago I wrote a post on an Ebay listing for a 2012 Heritage Darwin Barney No Position card.  It was the first time the card had been listed in nearly two years.  It had a BIN/BO of $250 and the seller accepted an offer of $175.

I thought that the buyer was nuts, since the previous 36 sold for an average price of $86.

Now it looks like the buyer got a bargain.

Last week another Barney No Position was listed.  The seller wrote a thread about it on Blowout.  He listed it for a BIN/BO price of $299.  I decided to watch the auction, figuring that it would be sitting there for years at that price.

It sat there for a couple hours. 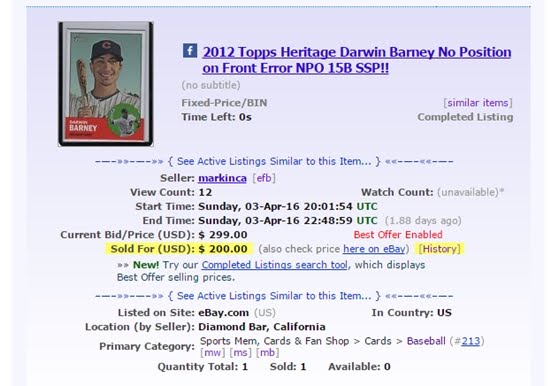 Heritage collectors are insane because the card sold for $200.

I couldn't spend $200 on an Ernie Banks rookie card.  I love him, but I can't ever imagine a situation where I'd spend $200 on a card of Darwin Barney.

If you're curious, I've been tracking the card since the set was released four years ago.  Here are all the sold copies from Ebay.  I'm missing the price on a few that went BO...this was before I knew about Watchcount.


I am also proud to say that the cheapest price on the list, $24 on January 20, 2014, belongs to me.  It was a second copy I bought for my Heritage team set.  I couldn't resist the low price.  I'm thinking about listing it now.  Seems like I should cash in on the insanity.
Posted by Wrigley Wax at 7:00 AM