Backing Up the Truck...Ken Holtzman

Yesterday's post on Rick Monday got me thinking about how he came to the Cubs. It was in a trade for Ken Holtzman. That led me to the idea to look at how the Cubs of '69 were all eventually moved elsewhere.

After two straight collapses in 1969 and 1970, Manager Leo Durocher started talking about "backing up the truck," dumping the current players.

Pitcher Ken Holtzman was the first to go. During the 1971 season he made some less than flattering comments about Durocher. He more or less demanded a trade. 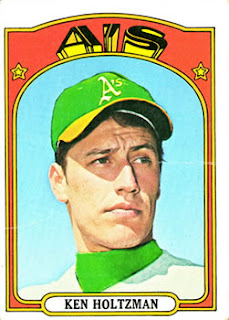 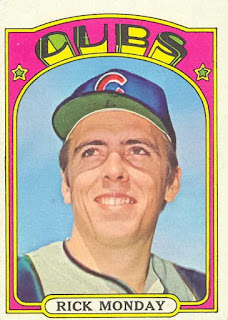 The trade led to two of the ugliest cards in the 1972 set....Topps airbrushing at its worst.

The swap worked out for both teams. Monday gave the Cubs the center fielder that they sorely lacked. He also gave them some power at the top of the lineup. The five years he spent in Chicago were the best years of his career.

Holtzman had the best years of his career in Oakland. He averaged 19 wins and pitched in three World Series.

This was a trade that was good for both teams...just not good for Topps.
Posted by Wrigley Wax at 7:00 AM