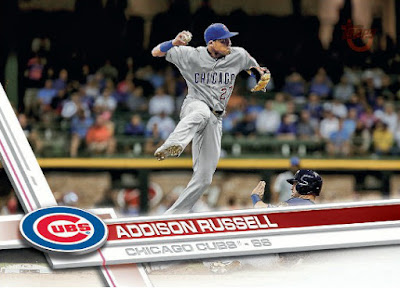 Yesterday, Topps released a version of the 2017 series one checklist.  The list was done alphabetically by the player's first name. They plan to issue the list with card numbers in a week.

The set includes something that has never been in any Topps baseball set..... World Series Highlight cards featuring the Chicago Cubs!  Remember that the first Topps cards came out in 1952, seven years after the Cubs previous Series appearance.

Those cards (there are four of them) boost the number of Cubs for my team set.  The League Leader cards also include several Cubs (six cards).  The regular player cards have ten of the boys in blue.  That makes a team set of twenty Cubs from just series one.  I'm guessing that would be the most Cubs from any one series.