I learned something new while I was doing some research for the Leo Durocher post:

Ernie Banks played in one game for the 1972 Cubs.

He retired after the 1971 season and became the Cubs first base coach for the 1972 season. He was 41 years old and his playing days were behind him.

But for one night, he took to the field as a player.

Yes, the cross-town White Sox.  Keep in mind that this was years before inter-league play. 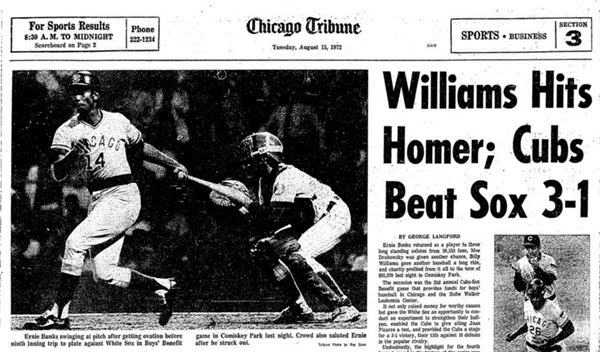 But each season, the two Chicago teams got together for the Cubs-Sox Boys Benefit Game.  A crowd of 38,000 fans were at Comiskey Park for the exhibition.  Ernie entered the game defensively as the Cubs first baseman in the bottom of the seventh inning and received a one-minute standing ovation.

He came to the plate in the ninth inning to another loud ovation.

Then he struck out.

The fans rose and cheered him one last time.

The irony is that Ernie's final at-bat in Chicago took place on the south side.
Posted by Wrigley Wax at 7:00 AM