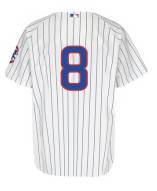 It was eight years ago today, December 30, 2008, the the first post of Wrigley Wax hit the net.

I started the blog because I had gotten back into collecting for about a year but couldn't find any Cub-specific blogs.  It surprised me because the Cubs were coming off of two straight division titles (though two straight post-season flops).

Fast forward eight years and I'm no longer the lone Cub card blogger.  I'm thrilled to have company.
The Cubs over the past eight years?  You know the story.  Team declines, Lou quits, team is sold,  Theo is hired, franchise is completely overhauled, 100 losses, prospects develop, 97 wins, 103 wins and a title.

It's been quite a ride and it's been nice to share the ride with you.
Posted by Wrigley Wax at 7:00 AM