Then and Now Billy Williams

I've stayed away from Topps Now thus far.  The initial price per card scared me away, and then with the success the Cubs had, more and more cards were made and I quickly realized that I'd never be able to afford to catch up.

I did make an exception, though. 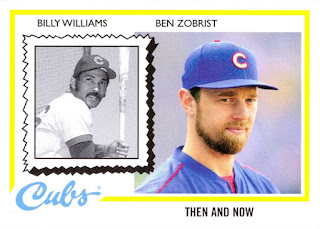 This was picked up for my Billy Williams collection.  It comes from the special Thursday Then and Now cards.  I got mine second hand, off of Ebay instead of from Topps, which I believe saved me a few bucks.

While I'm happy to add another Billy card, I'm still scratching my head Topps pairing of him with Ben Zobrist...


And what do they have in common?
I guess that is good enough.