I came across a thread on Net54 titled "Cards That Accurately Portray the Player."  The idea is to find a card that has an action shot that makes you say, "That's how I remember this guy".  It's a nice idea.  So I'll borrow it.

To try and do this for Billy Williams isn't easy.  There aren't many cards of him with action shots.  Most of his career was duing the posed era. 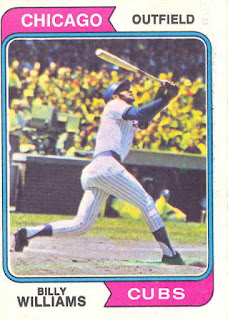 This is the one I choose and despite being one of just two action cards from his playing days, I really like it.

Billy was "Sweet Swinging Billy Williams" and this card shows him finishing up that sweet swing.  That's how I remember Billy.
Posted by Wrigley Wax at 7:00 AM

Email ThisBlogThis!Share to TwitterShare to FacebookShare to Pinterest
Labels: Cards That Accurately Portray the Player