Expanded September rosters have added a few more players to the Cubs roster. 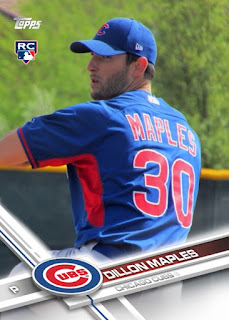 Maples was drafted by the Cubs in 2011 and prior to this season never rose above A ball.  He started the 2017 season in high A, and then moved to AA and AAA before getting called up this September.  He made his big league debut with the Cubs on Sunday and pitched a scoreless inning.  Yesterday was not as good as he got lit up for five runs in 1/3 of an inning. 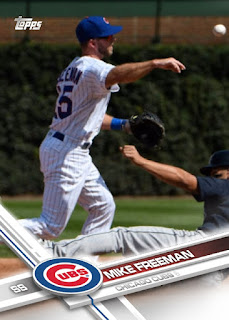 Veteran infielder Mike Freeman was added as insurance at shortstop.  Javier Baez had played every inning at short since Addison Russell went on the DL.  Sure enough, as soon as Freeman is added, Baez gets hurt.  And then Freeman makes an error on the second ball hit to him 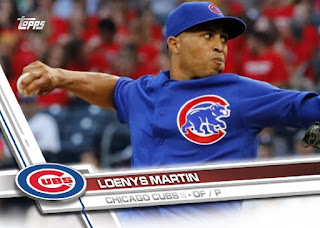 This is a bizarre one. Outfielder Leonys Martin was also added to the roster, but made his first Cubs appearance as a pitcher in yesterday's blowout loss to the Pirates.  I doubt that there have been may position players that debuted for their new team on the mound.  This was the only decent picture I could find, so I had to make the card horizontal.  I also listed him as both an outfielder and a pitcher.