What a Difference a Week Makes

A week ago Sunday the Brewers finished off a three game sweep of the Cubs.  Both Milwaukee and St. Louis moved to within two games of the first place Cubs.  I wasn't in full blown panic mode, but it would be safe to say that I was very concerned. 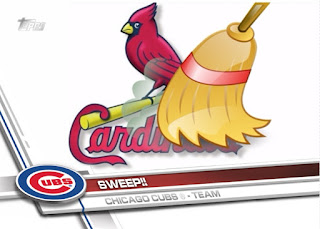 A week later the Cubs have rattled off six straight wins.  They swept the Cardinals over the weekend, moving the Redbirds into near Deadbird status, six games out.  The Brewers have also dropped back two games further, four out.

The Cubs chance of reaching the playoffs is now at 97.7%.  I'll relax when it gets to 100%, but I'm feeling much better now than I was last Sunday.
Posted by Wrigley Wax at 7:00 AM