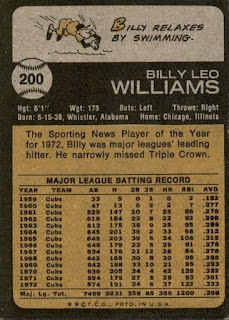 The big winner was Reggie Jackson.  He had a total of 12 hundred numbers including a run of ten years in a row.  Reggie was flamboyant, productive, and a Yankee for a while.  I guess he more than anyone else would figure to get such a large number.

Relievers were really ignored.  I count six players who are in the Hall of Fame as relievers - Dennis Eckersley, Rollie Fingers, Goose Gossage, Trevor Hoffman, Bruce Sutter, and Mariano Rivera.  Yes, I know he isn't in the hall at this moment, but when this year's balloting is announced, Rivera will be.  Of those six, four never had a hundred card.  The only ones to get it got it just once, Eckersley and Rivera.

Catchers, too, didn't get much respect.  There are five that I looked at - Johnny Bench, Yogi Berra, Gary Carter, Carlton Fisk, Ivan Rodriguez.  Bench made the list six times, but of the remaining five, Ivan Rodriguez in 2004 is the only other appearance.  Berra, Carter, and Fisk were shut out.

If you want to see exactly who did get those spots on the checklist, Night Owl has the complete rundown (through 2012) here.