Last week I picked up a long-awaited Sandberg card.  Today I got another that I've been waiting on.

It wasn't a very difficult project, nor was it too expensive.

There was, however, one card I never picked up. 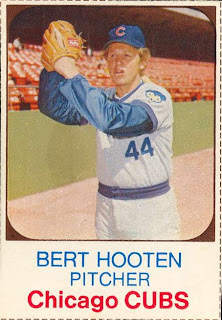 This card is from the first year, 1975.  You may recognize that Topps (yes, Topps produced the cards for Hostess) spelled both the first name and last name incorrectly.  Bert Hooten should be Burt Hooton.

Errors were rarely corrected for the Topps main set.  But for Hostess, Topps fixed this faux pas.  The corrected card was not nearly as available as the error.  I've seen then occasionally but the price was always to expensive. One sold in late November for $25.

Last week another popped up, and the seller was Dean's Cards.  Dean's has a reputation for overpricing cards. With this listing their reputation was unfounded.  It was a BIN for $3.25.  It hit it immediately. 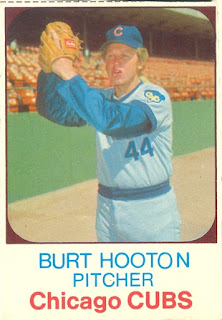 Bert Hooten is now Burt Hooton!
Posted by Wrigley Wax at 7:00 AM