This year I decided to get the variation cards if they showed a different player.  I wasn't interested in a different shot of the same player.

The update series included a variation card of Ryne Sandberg.  It is #269, which corresponds to the card of Craig Kimbrel.  The odd thing to me is that Sandberg already has a variation card, from series two. 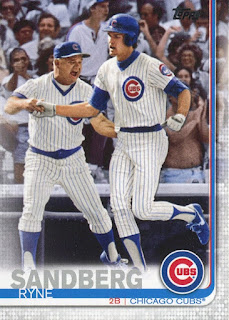 They picked a great shot of Ryno coming rounding third after a home run.  Popeye is pretty excited, too.  I was hoping that the picture came from the 1984 Sandberg game, when he hit two home runs off of Bruce Sutter.