For the past several seasons the Cubs have issued three different calendars.  Version 1 comes out in September, once the next season's schedule has been released.  It's usually a bare-bones schedule.  Often it doesn't even include game times, as not all of them have been decided yet.

Version 2 is given away at the Cubs Convention in January.  While it has more information than version 1, it still is not complete. The complete version is the third, which comes out during spring training.

Each year I collect all three versions.  I was tardy in picking up a copy of 2020's version one.  No excuses, I just forgot. 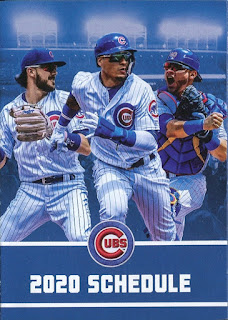 I have since remembered.

There has been chatter that Bryant or Contreras might be traded this off-season.  Since they are on the cover of the 2020 schedule, even if it is the early version, that can't happen.  Having an obsolete schedule is not allowed.

If they are on the cover, they must stay with the team.  It has been decreed... by me.
Posted by Wrigley Wax at 7:00 AM