I Was at Wrigley on Thursday 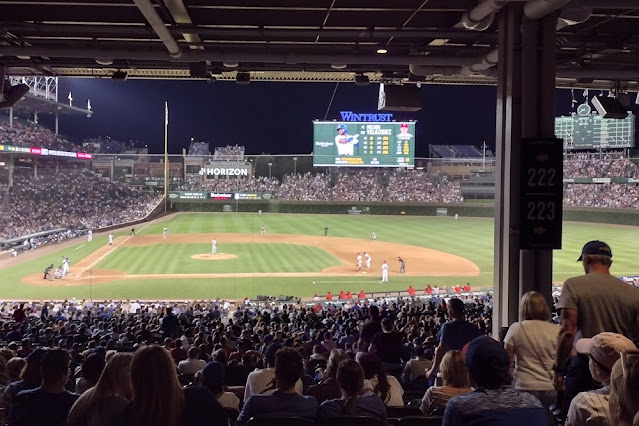 I was able to see the Cubs in person for the third time in a week.  Last week I saw them twice while on vacation in Pittsburgh. This week it was at Wrigley.  Friends with season tickets gave me theirs for the game as a retirement gift.

The game turned out great as the Cubs won 15-7.  It was the second of the three I saw that were Cubs wins in blow-outs.  It was also the second time I saw a position player pitch.

I gotta say that while it was nice to see the Cubs pick up some easy runs, I don't like it.  It seems like it has become standard practice for a position player to pitch the last inning of a blow out game.  It happens way too often and it cheapens the game.  I will now step off of my soapbox.

I did learn something new yesterday.

The W of the word Wintrust on the left field video board blinks after a Cubs win.  While the fans sing "Go Cubs Go" and the W flag is raised on top of the scoreboard, the W is blinking. I think it would be more obvious if they turned off completely the "intrust" so all you'd see is the W.  But I doubt that Wintrust would go for that.