A few weeks ago someone was showing their recent acquisitions and one of the cards was of broadcaster Harry Caray. When I saw the card, the thought struck me that I didn't have any cards that featured Harry. Holy Cow! I needed to fill that hole ASAP. And I was off to Sportlots.


I like Harry, but I wasn't going to spend much on him. I was able to find three cards for under a buck total. All three cards were Upper Deck products. 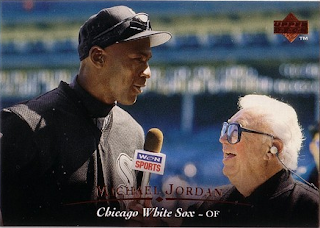 This is from Upper Deck 1995. It isn't really a Harry card, it's Michael Jordan's from his baseball playing days. But it does give us a nice look at Harry and the WGN microphone. 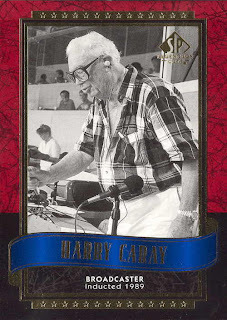 Up next is this card from 2003 SP Legendary Cubs. It looks like Harry is doing the 7th inning stretch, singing, "one...two...three strikes your out." He always waved the microphone for the one, two and three. 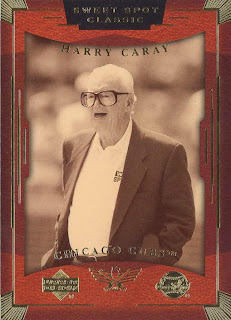 The final card is from Upper Deck's 2003 release of Sweet Spot Classic. Harry is down on the field before a game. 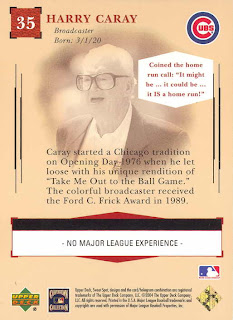 The back does have an error. The write-up states that he started a Chicago tradition on Opening Day 1976 by singing "Take Me Out to the Ballgame." It didn't happen that way. Bill Veeck bought the Sox in 1976 and inherited Harry. At the time he was probably the Sox biggest draw; the team wasn't very good. During the season Veeck noticed that Harry sang along in the booth as Nancy Faust played "Take Me Out to the Ball Game" during the 7th Inning stretch. He tried to get Harry to sing on the PA system, but Harry refused. So one day Veeck snuck a live PA mike into the booth and suddenly Harry's voice was booming throughout the ballpark. That's how a Chicago tradition was born.


Harry brought the tradition with him when he moved to the Cubs in 1982. Since his death in 1998, the Cubs have maintained the stretch with "guest conductors." This is the 15th season with the celeb singers and at this point, I think its something the Cubs can retire. Let Pat Hughes and Len Kasper rotate duties, but do away with the other singers. Many of them have no idea who Harry Caray even is/was.


I know who Harry is. I heard his broadcasts from both sides of town. I even got his autograph at a Cub game....and I'll tell that story tomorrow.