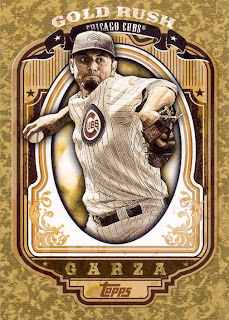 ....Matt Garza.  He's the third Cub out of the 100 Gold Rush cards, but the only one in Series Two.  Sandberg and Castro were included in the first series.

It will be interesting to see if the Cubs keep Garza or deal him for prospects.  He's still a couple years away from free agency, so that would be a reason to keep him.  But for a year there has been talk of him generating a lot of interest from other GMs.  I'm not sure what the big deal is.  In his time with the Cubs, his record is a mediocre 14-17.  He's under .500 for his entire career, though his ERA is only 3.88.

Back to the Gold Rush cards....there were 10,000 packs of 5 cards available with Series Two.  All it takes to get the pack is 50 wrappers from series two packs.  Spend $100, send the wrappers to Topps, and get five cards....such a deal.

No need to bother with the redemption, though.  Most cards can be snagged off of Ebay for a buck or so.

I haven't seen a checklist for the 50 Gold Rush cards from Series Two, so I did some searching on Ebay and put a checklist together.  The players on the 50 cards are from only 23 teams....seven got completely shut out.  I guess I should be grateful that one Cub made the list.