Five years ago I put together my Cubs team set from the 1974 Fleer release, Baseball Firsts.  This was a tricky one because my usual source for team sets at the time, Teamsets4u, didn't have a listing.

I went to COMC and read the backs of the cards to see which ones would be considered Cubs cards.  I came up with three cards and purchased them.

However, as I was entering my collection on the Trading Card Database, I came across a fourth card. That was a couple months ago and it has taken me that long to find the missing card. 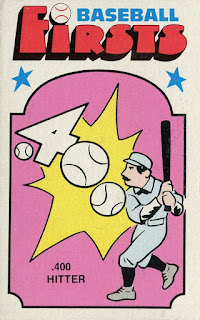 In 1876, the National League's first season, Cubs second baseman Roscoe Barnes became the major league's first .400 hitter.  He hit a robust .429.  The next closest hitter was 63 points behind him!
Posted by Wrigley Wax at 7:00 AM