Glenn Beckert, the All-Star second baseman of the 1969 Cubs passed away yesterday.

Despite being a four-time All-Star and a Gold Glove winner, Beckert was often overlooked.  That will happen when you have four hall of famers as teammates.

A converted shortstop, Beckert was the Cubs regular second baseman from 1965 through 1973.  He handled the position well and won the Gold Glove in 1968.  Beckert wasn't a slugger.  He was a contact hitter and prided himself as a tough guy to strike out.    Proof of that is the fact that he had the fewest strikeouts per at-bat in the league five times between 1966 and 1972.  Batting second in the lindup, his job was to get on base and let the three hall of famers that followed him (Williams, Banks, and Santo) do the heavy hitting. 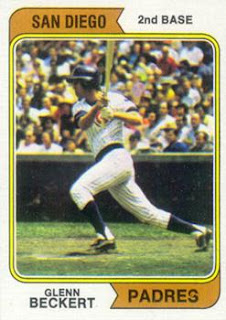 He was traded after the 1973 season to the Padres, which led to this interesting card.  He played in just 73 games with the Padres over the next two seasons before his career ended.  He returned to the Chicago area and remained there until moving to Florida a few years ago.

I've got 38 cards of Beckert.  I've put them all into a tile.  The Topps cards are first.  The rest are alphabetical by brand.