One of my saved Ebay searches is for "Barney 1/1."  While I have most of his cards, there are still many 1/1 parallels that I don't have, for obvious reasons. 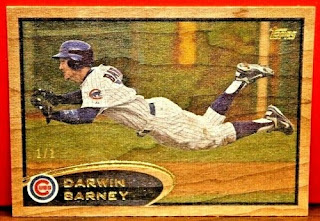 I already have ten different versions of the 2012 card, but I thought I'd take a stab at adding #11.

There was one bid that came in almost immediately after the card was listed.  Then nothing.  I set my sniper at a price I felt was fair but not outrageous for a 1/1 card.  The auction ended during the afternoon on Easter Sunday and I was busy so I didn't have a chance to check on it until it was finished.  I optimistically hoped for the best.

I was shocked when I saw the closing price. Yikes, one hundred bucks!  That was not my bid....  my bid wasn't anywhere near that!