First Disc in a While

I was hot and heavy into the MSA discs a few months ago.  I've had nothing since.  It wasn't due to a burn out or a lack of interest.  It was a lack of product.  The only discs missing from my collection are the ones that are rarely listed anywhere and are nearly impossible to find.

I have several saved eBay searches for the missing discs and I got a hit a couple weeks ago.  A 1979 Wiffle Manny Trillo was listed.  It was priced reasonably and I hit the BIN. 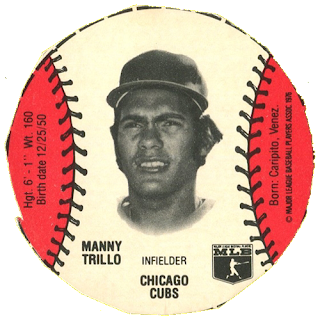 The 1979 discs came on the Wiffle Ball's box and had to be had cut off of the box, which explains the odd shape of mine.
There are five Cubs in the set and I now have two of them.  I'm still on the hunt for Bill Buckner, Jose Cardenal, and Dave Kingman.